Season 1 is coming to an end and with that comes Cataclysm, an in-game event that will put Prospectors in the stormiest weather they’ve experienced yet. It is also an important time to remind you that Season 2 is starting next week, on September 28th, which means we will have a season wipe.

Season 1 is coming to an end and with that comes Cataclysm, an in-game event that will put Prospectors in the stormiest weather they’ve experienced yet. It is also an important time to remind you that Season 2 is starting next week, on September 28th, which means we will have a season wipe.

When Season 2 begins, all progress will be reset except for Aurum and acquired cosmetics in order to put everyone on an even playing field while also adding content to the game to make your Season 2 experience different from Season 1. 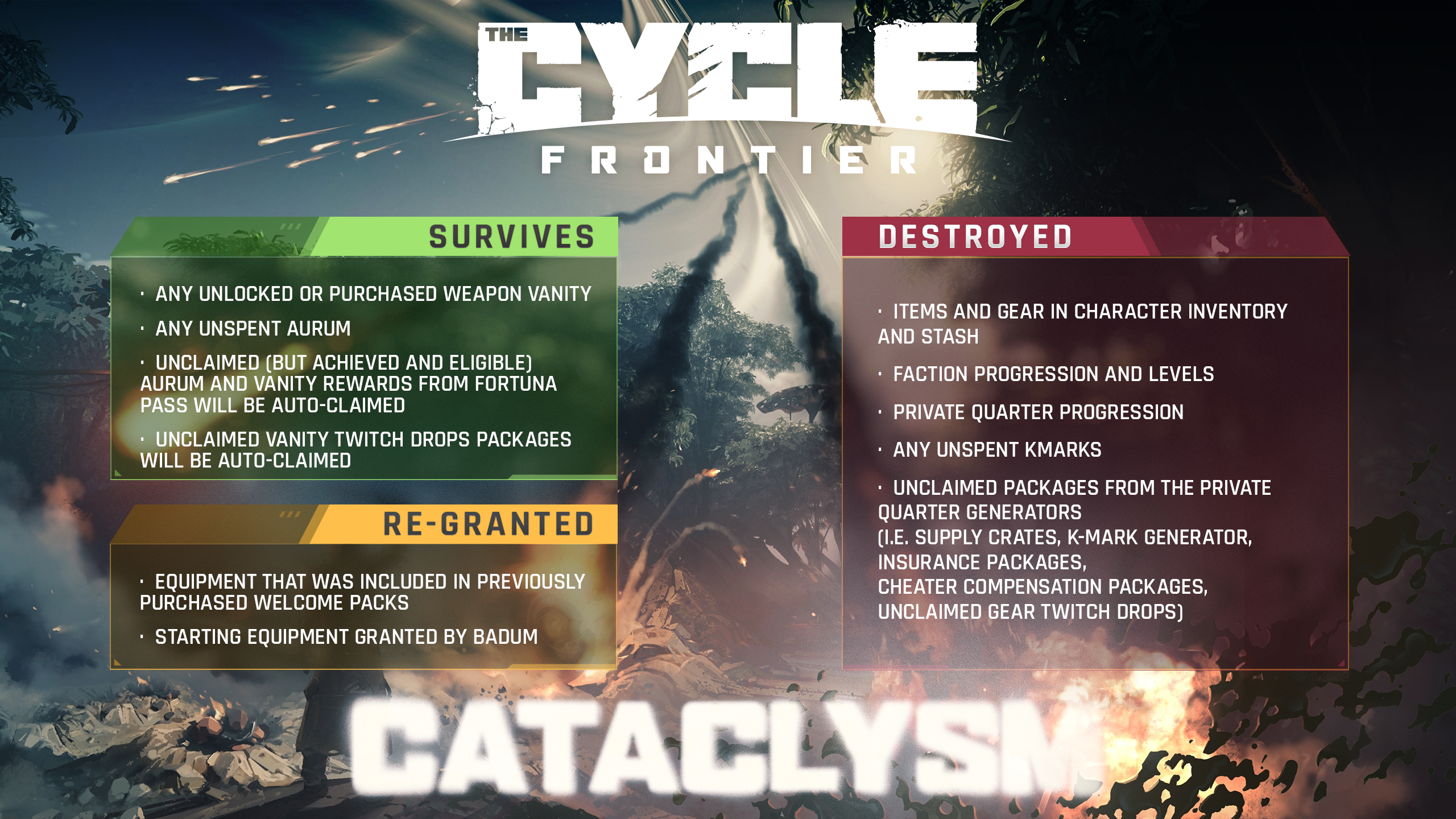 With that said, let’s see what Patch 1.7 has to offer as we head into the final week of Season 1.

You’ve wanted it, you’ve been waiting for it (a bit, uh, longer than expected in fact) and it’s finally here: the Cataclysm is upon us!

This special event will change the face of Fortuna III for the remainder of Season 1. The surface is more dangerous than ever but also strangely rewarding, in its own catastrophic ways. The ecosystem’s balance is shaken to its very core as the weather gets even rougher.

Days are shorter as storms and spikes become ever more frequent. This constant change of atmosphere is throwing pilots of balance... but at the same time, they’re feeling just that much bolder. Evac will only be possible during a storm, so prepare for some bumpy rides!

In a weird twist of fate, the biologic and geologic impact turns out to be quite a boon for intrepid Prospectors. Creature parts are much easier to collect, and the natural aggressions allow the pelted rocks and soil to unearth their rarest materials.

Finally, meteors are falling at an increased frequency, and they’re not exactly what one would expect. They look different. They have a different glow. One would say they almost feel... alien. Who knows what those new celestial bodies might contain in their very core?

One thing’s for sure: all Hell’s about to break lose, and Prospectors are more than ready to jump on this opportunity.

For easier reference, here’s a quick list of what you can expect during the event:

To celebrate this cataclysmic event, we have a special sale running on 3 different Legendary weapon skins. Don’t hesitate to try these out during the event and check our shop in case any of those is catching your fancy! 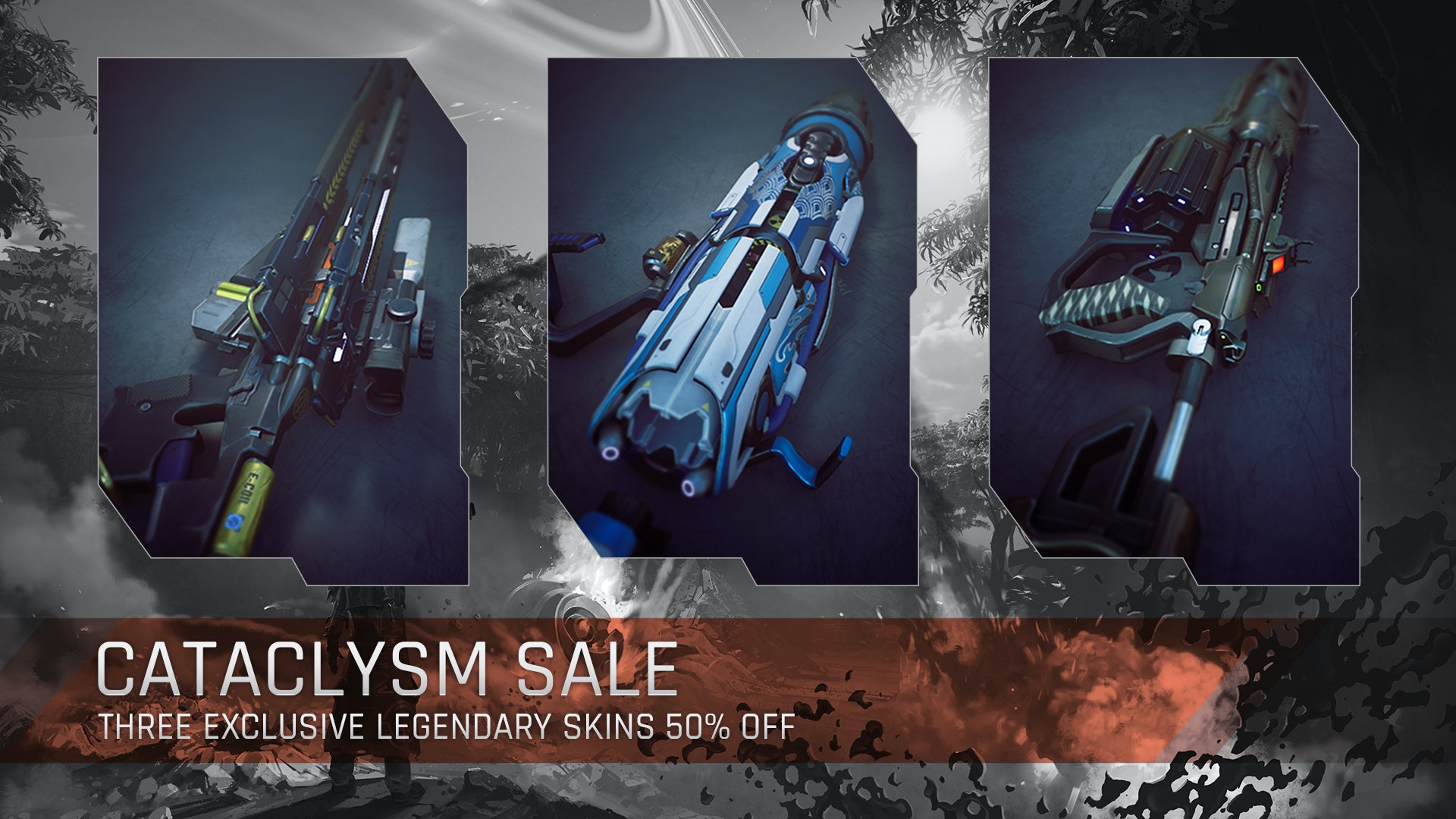 This event will help you fill your pockets with loot and riches while allowing you to try out some of the most high-grade weapons in the game. Don’t forget that Season 2 will start with a progression wipe, so don’t hold back and enjoy these few days of lavish abundance!

Restored the cheater compensation feature to its full ability.

Make sure to join our Discord server (https://discord.com/invite/thecycle) and our subreddit (https://www.reddit.com/r/TheCycleFrontier/)

Do not forget – Fortuna favors the bold!